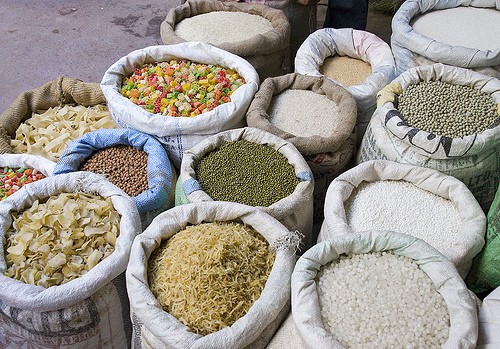 Kale, goji berries, chia seeds, wheatgrass—the last few years have been all about the superfoods, which have popped up not just in health food stores and juice bars, but on trendy menus all over New York and all over the country.

But the latest craze is for what are being called ancient grains. Spurred on somewhat by diet trends that eschew refined carbs and also by the rise in gluten allergies, these grains are fast becoming popular menu staples at high-end restaurants. Chefs actually tend to love them, in my experience, because they provide subtle new flavor and texture palettes to play with on the plate.
What are ancient grains?

These grains are called ancient grains—or sometimes heritage grains—because they’ve been around, more or less unchanged, for thousands (yup, thousands) of years. Ancient societies cultivated many of them, but they then fell out of favor with the huge popularity of staples like wheat and corn.

Whatever the reason, they’re absolutely back in favor now, and easy to add to your next menu for a dose of good health and great flavor.

Quinoa — The most popular so far is quinoa. This little grain that looks a bit like a comma when cooked, is light and fluffy, a little like couscous, but is a complete protein and contains lots of fiber. It’s also gluten-free and easy to digest, and it’s popping up everywhere, being turned into pasta and flour now as well. On its own, it’s great in salads hot or cold. Innovative chefs are tossing it into pastas and using it the way one might use breadcrumbs as toppings for dishes.

Millet — Yes, this is the same grain you might see in your bag of bird seed, but it’s not just for the birds. Cooked up, it makes a creamy, slightly sweet dish that pairs well with just about any kind of flavors, but especially well in salads and risotto-like dishes.

Freekeh — Native to Middle Eastern, Egyptian, and Palestinian cuisines, freekeh is actually wheat that is harvested green, then roasted. It has three times as much fiber as barley, and twice as much as quinoa. Of course, you’ll see this paired with lots of Middle Eastern flavors with excellent results.

Teff — The smallest grain in the world, teff is a staple in Ethiopian cuisine where it makes the traditional spongy bread, Injera. But I’ve also seen it pop up in salads and as a topping or crust on meats.

Amaranth — Native to Mexico and the southern U.S., amaranth was an important food for native cultures here before colonization. The seeds can be popped like popcorn and are part of a traditional Mexican dessert, and can also used in pilafs, or even as a breakfast cereal. It’s also ground into flour that has a nutty, malty taste and is great for adding to gluten-free foods.

Kale is getting to be a little “last year,” but adding ancient grains to your event’s menu—or even your home menu!—will keep you right on the cutting edge with the healthy foodie set.

Do you have a favorite recipe for one of these more unusual grains? I’d love to hear about it in the comments below!